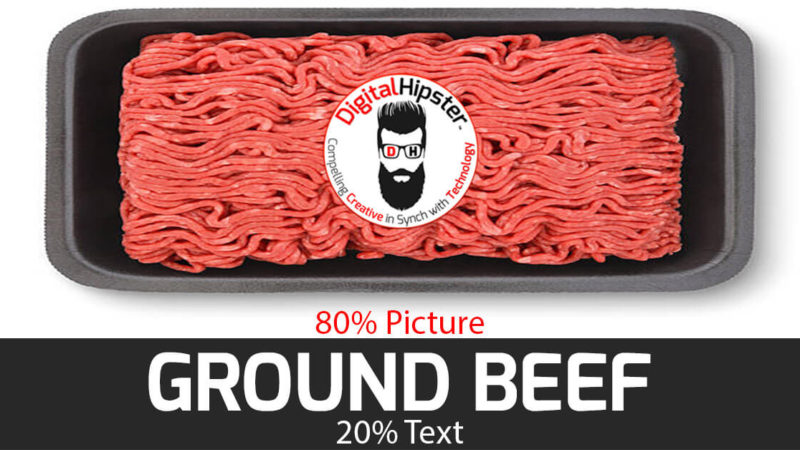 Are you paying attention to Facebook’s 20% in-image text rule for Ads?

Although Facebook now officially says an ad won’t be automatically rejected for having more than 20% text in the image, Facebook’s algorithm applies an “image text rating” for ads or promoted posts.  This new sort of sliding scale greatly determines your ad’s potential reach.  This can be a huge impact especially for smaller niche audiences which are harder to reach. Previously,

Facebook required advertisers running ads on Facebook to meet the exact requirements laid out in their complicated 25-rectangle grid which divided an image into 25 sections.  The requirement was that text could not cover more than five of the 25 rectangles which felt sorta like doing a captcha but selecting boxes with with text in them instead of buses or storefronts.

The reason for this subtle change to the 20% in-image text rule according to Facebook:

Our research has shown that people demonstrate a preference for ads with less text. Previously, if 20% of an ad image’s area was text, it was not approved to run on Facebook, Instagram or the Audience Network. We’ve heard from some advertisers that this can be confusing, as it’s not always clear that an ad does not meet the policy requirements until after creative has been submitted. We are shifting to a new solution to improve this experience which allows advertisers more flexibility while still allowing us to maintain an enjoyable experience for people

In other words, people don’t really like reading so much and Facebook knows what’s best for you. Apparently we all really just want to look at pictures of puppies, old girlfriends and sandwiches.  But seriously, there has been lots of recent research and A/B testing of ads with various amounts of text and the overwhelming verdict is less is more when it comes to ad engagement, sharing, and overall ad audience satisfaction.

Never stop testing, and your advertising will never stop improving.

While research, testing and algorithms are great for learning what works best as a whole, the world of digital marketing is still “part art and part science” as Ogilvy would say. The subtle nuances of effective ads shouldn’t always be distilled down to rigid templates just because Facebook feels it’s what the masses want.

Life’s too short to put it into print.

Regardless, paying attention to the 20% in-image text rule is still important.  However, most experienced digital marketing agencies like DigitalHipster don’t like the final approval of their Facebook ads being decided on by Facebook’s algorithm or their internal review team.  What’s next? No text in images? What if Facebook’s team decides people only like certain fonts, and the algorithm determines 80% of your fonts should be Comic Sans?  God forbid!

Anyways, here’s the text overlay tool provided by Facebook to check if your ad or promoted post complies. Please note the tool does not work on mobile. We ran this blog post’s image through it, and just like ground beef it passed the “80/20 test.”

Is your business is having trouble keeping up with all the constantly evolving Social Media and digital marketing rules and best practices? Give us a call at 330-331-7189  or contact us today for a free initial consultation to see whether or not we can help you.

Matt Ross is the President and Founder of DigitalHipster Inc. est. 2009.  Matt and his Wife Wendy have two adult sons. He's a Goldman Sachs 10,000 Small Business Alumni, a member of The Society of Martin Scholars at The University of Akron, and an active member in a few book clubs. When he's not deep in code and cranking music, or trying to keep up with the latest Google Algorithm, Matt is gardening, mountain biking, off-roading in his Jeep, writing for fun or being a guinea pig for his wife's yoga instruction. He lives and works in Highland Square Akron, Ohio. For the 15 years prior to launching DigitalHipster Inc.  Matt worked as a Senior Advertising Account Executive and Integrated Sales Director for major television stations and newspapers in the Akron, Cleveland, Phoenix and Las Vegas markets. He has successfully planned, sold and executed millions of dollars in innovative multi-platform advertising campaigns consisting of television commercials, web video, content integration, multi-carrier mobile WAP sites, print ads, and radio. Matt says, "During my years working in broadcast and print media, I learned how to gather real-time advertising response rates and develop cost-effect creative that works for my clients.  By working for over a decade on the sales side with millions of dollars of advertising revenue, I learned how to spot bargains for my clients and see what worked and what didn't. We're not just a team of graphic designers, or artists that take chances with your ad budget. We have real advertising experience across all the major advertising channels."